Six weeks into second semester, I was asked to become the teacher for a group of Algebra II students.

I get to be the sponsor for my school’s chapter of Mu Alpha Theta. This is an awesome group! Unfortunately, all but three students graduated last year, and one of those transferred to the new school!😩.

END_OF_DOCUMENT_TOKEN_TO_BE_REPLACED

This is a blog that got written, but not posted. This semester I have a different group of kids, and as I read this post, I was reminded of how much fun we had last semester. And I am thankful for all the days since this recorded day in September with these awesome kids!

Tuesday is a “Formative” assessment, a pencil and paper, constructed response. You know the drill… “The students will be able to…. ” Anyway, I knew from my informal formative assessments last week that I needed to make sure my students understood how to build a histogram from the data before they tackled this test.

So I had them set out to build a histogram with 3×5 cards on big posters. (I wanted them to understand that those bins contained real numbers!)

We had a set of data on the heights of all the students in my classes, in inches, so I decided to stick with the familiar. I scaffolded by asking them to create a stem and leaf plot of the data and we ended up with three lovely rows of 3 leaves, 25 leaves and 7 leaves.

I had them turn the stem and leaf plot sideways. “What does it look like?” I asked.

“A histogram,” said one young lady. “Oh yeah,” some said. “I see it now, ” said another. And just as they thought they had deciphered what I wanted, they were given the task of putting the numbers on 3×5 cards and sorting them from least to greatest.

Puzzled, they did as they were asked as I ripped huge sheets of paper from a pad and laid them on the tables. “Lay the cards out just like the stem and leaf.”

Once the cards were laid out, I had them add intervals across the bottom, and frequencies up the side. As they worked on the task, they began to realize, if they had not already, that they were actually building histograms, something we had been working around and with in various ways since the beginning of the year.

At the bottom of each column of cards students wrote the actual intervals, which meant that numbers were skipped, since not every number between 57 and 74 were represented.
I asked those students where the missing numbers would have gone if we had them. After a bit of discussion, they determined that if they had those numbers, they would put them in the same line of the stem and leaf, so they needed to make room for them in the same column with the other cards.

Not all students were clear on what we were doing, so I was pleased (an understatement here!) when a couple of students from one group went to other groups and started explaining (!) to the others why they needed to (1) change the bins to cover the missing link and (2) why the bins had to cover the same amount (range) of numbers.

That task accomplished, I had them find the bins with mean, median, and 1st and 3rd quartiles. They were a little disheartened to find them all in the same bin. (We had been working backwards from histograms to approximate these values for a MARS Project
problem based task unit which had proved to be a difficult task on a conceptual level for many of them.

To correct this, the students decided they needed to spread the numbers out, have more bins… Some students leapt right in and started spreading out the cards. Others couldn’t envision how to start, so I asked them to just start spreading the cards out into smaller groups. One group immediately divided the cards into four columns of ten cards (we had 40 values), and clamored to show me. I asked them to give me the ranges each bin covered. They soon discovered they had the same numbers in more than one column! More shuffling ensued. Ranges were computed. Students debated whether each bin had the same ranges. Maybe more bins were needed, different ranges were calculated, discussed and decided on. Some students had five bins, some had six. As the bell would ring, I had students leave their unfinished charts for the next classes to finish.

I get some students more than once, for classes called strategy class, so after first period, I had some new students and some students from first period. The first period students had to explain the task and help the current period students finish. I was also challenging them to find different bin ranges. If they grouped five bins, I would then ask them to calculate for eight. One group decided on 14 bins, with one number falling in each bin. After each group felt they had the best arrangement, the students would outline the cards to create bins, recalculate the frequencies, and remove the cards.

As new classes came in, the stem and leaf exercise was repeated, the card decks were distributed and the task would begin again…

Once we had the drawings up on the wall, I asked the students to tell me which groupings seemed to be the best distribution and summary of our heights. Which graph seemed to tell our story the most clearly. I’ve included some of the finished product here. I am sorry about the picture quality. Some students’ markings didn’t show up well.

Why was this the best day ever? Because my students were totally engaged and learning. I was blown away by the level of engagement shown for this task from all my students, even those who were generally disengaged. The students who came to me twice were leaving and telling me they couldn’t wait for the next period!

I wish I could bottle the elixir let loose today! I want every activity I introduce to generate the type of group dynamic, the peer tutoring, the calculations and the understanding that dawned as they calculated different bin groupings. Did I mention that I love my students this year! Each and every one of them! Today was definitely a good day! 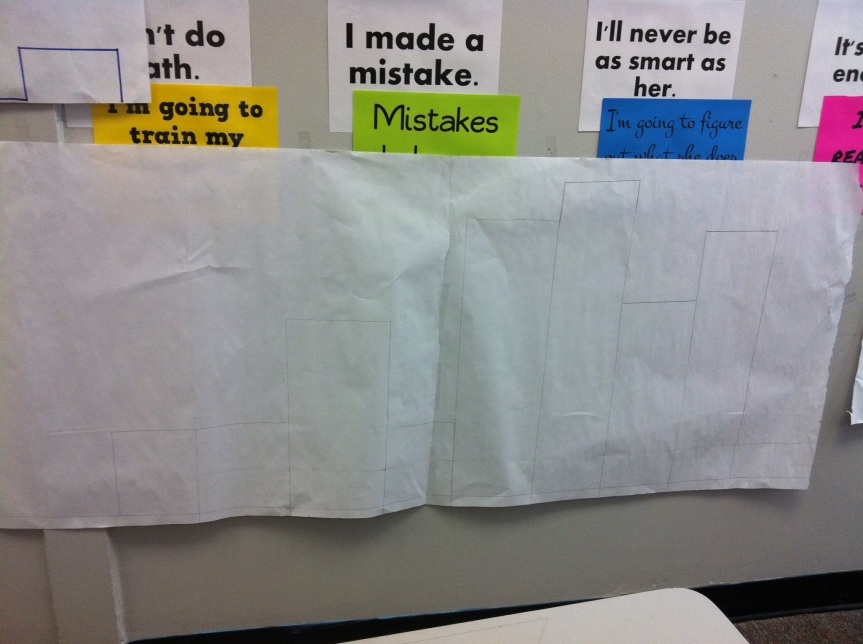 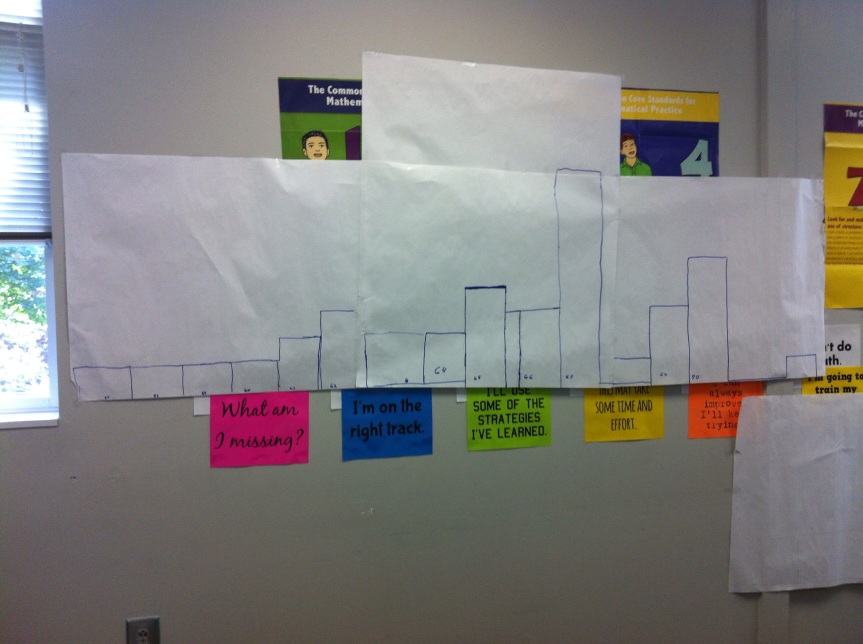 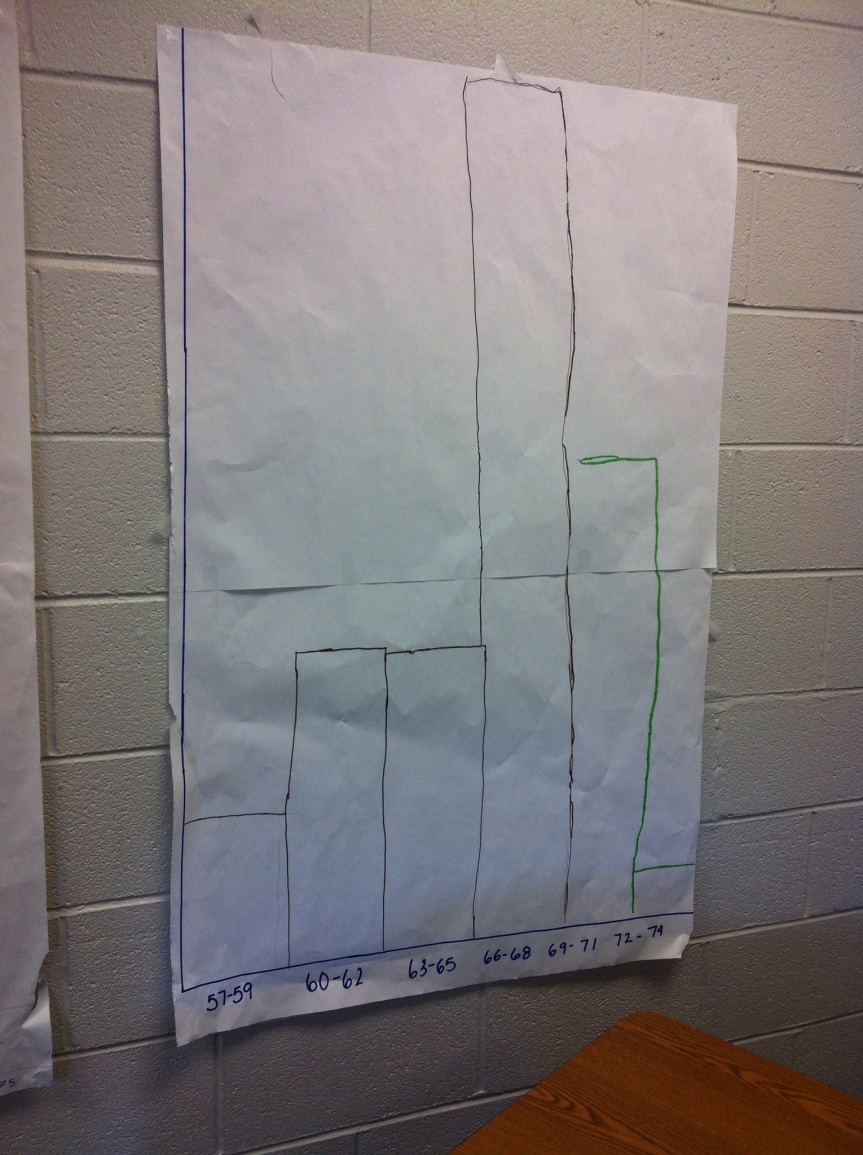 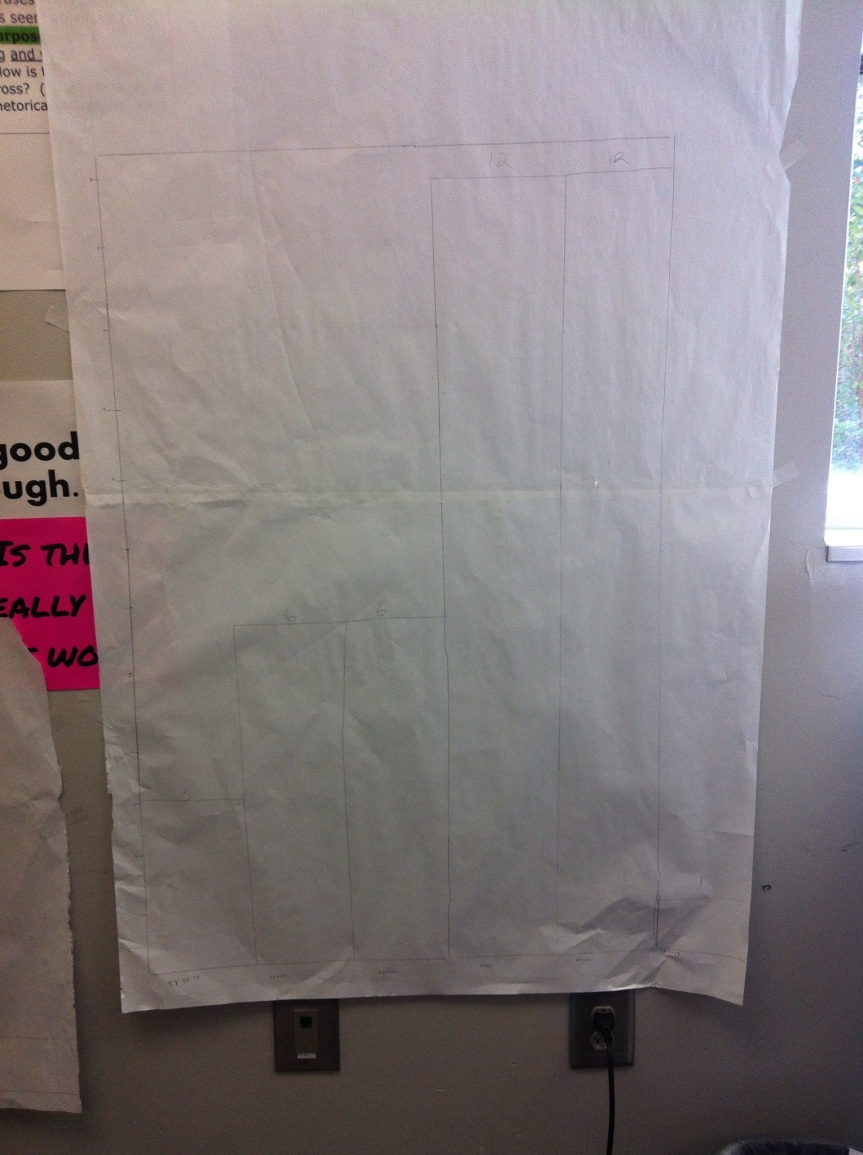 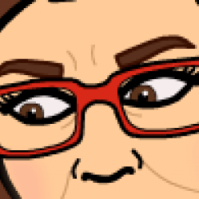